The quiet "Dali Garden Bed & Breakfast" is located in the centre of the Bai minority farmers’ and fishermen village XiangYangXi between the CangShan mountains and at the shore (75m) of Erhai Lake, 12 km (7,5mi) north of Dali Ancient Town.

You actually haven't seen Dali without browsing Dali's surroundings. The beautiful Erhai Lake, the villages, the farmers working in the fields, the Cangshan mountains. Two km north of the B&B the ancient town of Xizhou with it's Bai morning market, traditional Bai courtyard houses and the famous local dish Xizhou Baba. Zhoucheng, another Bai traditional minority village, with it's intimate market and small scaled Tie-Dye ateliers is also nearby.

The ideal location to explore the area of Dali

Our Living room with TV

To 2nd and 3rd floor

Chairs and tables in the garden

View of the garden

Sitting on the veranda

our large kitchen where we serve your extensive breakfast

Besides Chinese and Bai (local language), we speak English, French, German and Dutch.

Good soft mattresses, 2 comfortable chairs and table which you also can use for sitting on the veranda. The rooms are decorated with parts of dresses of several minorities in Yunnan.

Spacious attached bathroom with walk-in shower,  24 hours hot water and western toilet, hair dryer, bathrobes, slippers. Everyone has to use slippers in the house. Free Wifi.

You start your day with an extensive Western breakfast with different kinds of home made bread, excellent Yunnan coffee, different kinds of teas, orange juice, marmalade/confiture, Dutch cheese, boiled/fried/scrambled eggs with ham or bacon, yogurt or milk, muesli/cornflakes, pancakes,  seasonable mixed fruit and on. Our breakfast is always include.

When you want to have lunch or dinner in our B&B as Bai, Chinese or Western dishes, wines, Dali beer, spirits, etc, please ask us in advance. We use reasonable prices.

We organize excursions in the Dali region, because we live here we can show you the nicest places. In the evenings we organize cultural events on request like Bai language, songs, dance and music. We organize Chinese/Bai cooking class and calligraphy and painting class.

On chilly evenings we fire the stove in our living and we provide electric blankets in your bed.

Welcome drink with home made snack and free village walking tour after arrival.

10% discount for three nights and over. 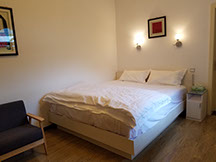 no TV-set, TV in our living room 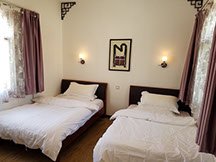 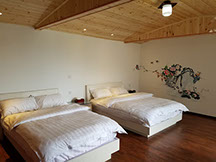 Besides our B&B we organize tailor made tours and travels in the most beautiful and divers province Yunnan with https://YunnanMinorityTravel.com. We are successful as proven by our many hundreds of satisfied guests. That is because we know our province very well - but are still passionate to discover it - and are eager to show it's beauty and diversity to the rest of the world.

Dali Garden Bed & Breakfast is located in XiangYangXi just 15 car minutes from the ancient town. XiangYangXi is an authentic Chinese farmers' and fishermen village, a three minutes walk to Erhai Lake. You can take a walk among the farm fields, walk or bike along the lake and villages and explore the streets and alleys where families still live in centuries old courtyard houses.

When you need our address in Chinese for a taxi driver please ask us.

We are happy to help you.

We can pick you up from Dali and Lijiang airport or Dali train station. Book Now.

Under you find some brief information about Dali and region.

If you want more information or if you want we organize a one day- or a two days tour for you, please don't hesitate asking us when you stay with us.

The Google Map is centered on Dali Garden Bed & Breakfast. You can easily go to Dali, or other places, and zoom in till street level.

Xiaguan lies on the southern tip of Erhai lake, 380 km west of Kunming. It was once an important staging post on the Burma Road and is still a key centre for transport in north-west Yunnan. Xiaguan is the capital of Dali Bai Autonomous Prefecture. The prefecture is subdivided into 12 county-level divisions: one county-level city (Dali Shi), eight counties and three autonomous counties.

About 15 km north of Xiaguan lies the Ancient Town of Dali.

Dali is a perfect place to take vacation from travelling. The CangShan in the west and the Erhai lake in the east site, the farmers- and fishermen's villages and the Ancient Town by itself. Dali is a small town that has some preserved cobbled streets and traditional stone architecture with its old walls. You can have a good overview of the town and its surrounding by walking around the town walls. Entrance of the still existing wall is near the South-gate. You have a better overview from Zhonghe Si (temple) halfway (3000m) CangShan mountain, you can get there by cable car.

One km north of Dali, standing on the hill-side, the Three Pagodas look particularly pretty when reflected in the nearby lake. They are among the oldest standing structures in south-western China. The tallest of the three, Qianxun Pagoda, has 16 tiers that reach a height of 70m. It was originally erected in the mid-9th century by engineers from Xi'an. Its flanked by 2 smaller 10-tiered pagodas, each of which are 42m high.

The temple behind the pagodas, CongSheng Si, is built in the traditional Yunnanese style, with three layers of buildings lined up with a sacred peak in the background.

In China it’s easy to withdraw money from an ATM using Maestro, Visa or other plastic. For safety (e.g. the card don’t go out) do it always when the bank is open. Opening times are mostly from 8.30 to 17.00.

Maximum withdrawal per day is 3000 rmb.

On and around the following four Chinese Holidays, many Chinese people are travelling. Prices of accommodation and transportation are perhaps higher than normal.

Be aware that in touristic places also restaurants and bars could calculate higher prices.

March Fair is a festival and a country fair as well. It lasts one week beginning from 15th day of the 3rd lunar month (according Gregorian calendar on April 19  to April 25 in 2019). In the fair, the goods, cattle and horses may be bought and sold. It is the happiest festival in the year for the Bai people.

In addition, the Bai people hold different activities, such as horse-racing, performances of folk dance and folk song singing.

From the 24th to the 26th of the six lunar month is the Torch Festival (according Gregorian calendar on July 17 in 2019). It’s an important festival for Yi and Bai people The main activities are wrestling, bull-fighting, archery contests and horse-racing.

On the night of the festival, people light torches and then move in a procession towards the outskirts of the village, they sing and dance around the huge burning torches.

Every year on the 15th of the eight lunar month is the Mid-Autumn Festival in China (according Gregorian calendar on September 13 in 2019). On that night the moon is supposed to be brighter and fuller than other at any other time. People get together in their courtyards, on river banks or in parks to offer feasts to the moon and eat “moon cakes” and many different kind of fruit. The Mid-Autumn Festival is generally accepted as an occasion for family reunion.

Most of the Bai people are Buddhist. Every village has several temples. But besides their Buddhism the Bai also have their local gods. So each temple is dedicated to this gods. There are many gods, e.g. money god, medicine god, god for mercy, god for fishermen, etc. The gods have birthdays too and when it is, it’s a great festival, people dance, sing and bring offers to the god.

Markets are always nice to visit. So much colours and the smell of herbs, tea and the locals who do their shopping. You will need a lot of memory in your camera.

When you like to visit a market in any place, ask us. We will organise a tour for you including one of the many markets in Yunnan. Example of markets around Dali:

Most market days are calculated with lunar-calendar, like the market in Dali Ancient Town and in XiangYangXi (with life stock and everything a farmer wants to buy or sell, dentist, hairdresser and more).

Some markets roulades between places.

There are also markets on fixed days.

The market in Shaping is every Monday morning.

Xizhou have a morning market every day.

In Shanba is a Wednesday market, many livestock.

In Yousuo is a Friday market.

In Guanping is a Tuesday market.

Other sites and places of interest

Yunnan's mild climate is both pleasant and diverse. The province enjoys a tropical highland humid monsoon climate, characterized by cool summers and warm winters.
Dali is, despite it's altitude of 2000m (6561ft), most often warmer in summer and winter. Sometimes a cool fresh wind blows through the area. This is the result of Dali's location between the beautiful Lake Erhai and the Cangshan mountains, rising up to a height of 4200m (13779ft).
Dali is not only beautiful in Summertime. Also in Winter, Spring and Autumn it's very pleasant.